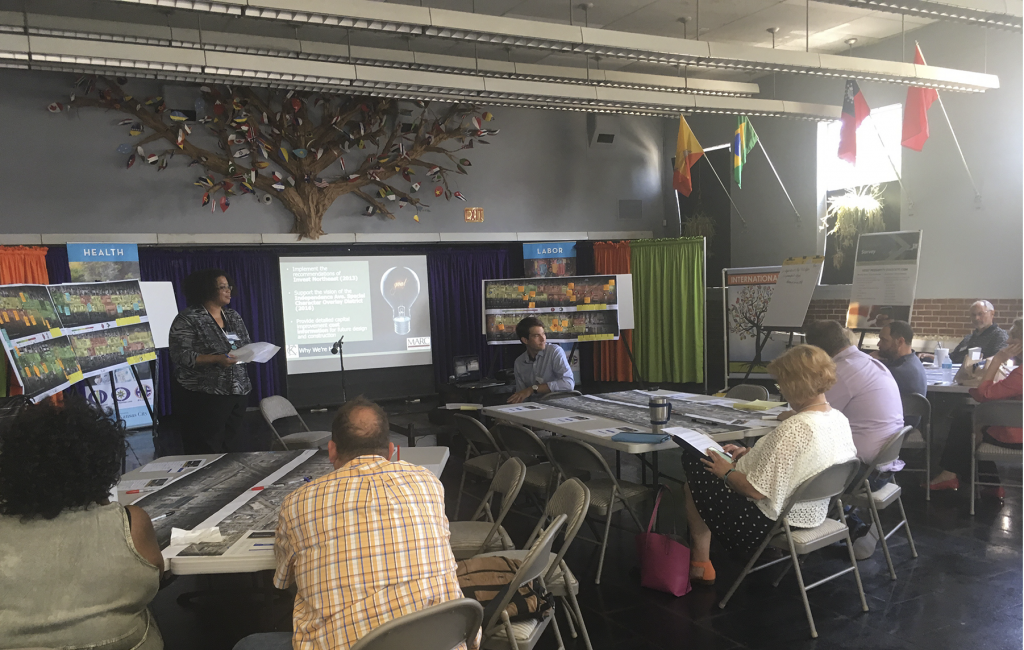 A new safety study is aiming to make the pedestrian experience along Independence Avenue more user-friendly.

The Independence Avenue Pedestrian Safety Study – a partnership between the Mid-America Regional Council (MARC) and the City of Kansas City, Missouri – convened a steering committee of Northeast community leaders on Wednesday, July 12 for a planning conversation.

The group discussed goals and strategies for solving pedestrian issues along Independence Avenue, which accommodates thousands of motorists every week. All of those motorists lead to congestion, speeding, and ultimately, vehicle crashes. Study leaders have found that between 2013 and 2016, 128 crashes were recorded at the intersection of Van Brunt and Independence Avenue, while an additional 79 crashes were recorded at the intersection of Hardesty Avenue. Chestnut Avenue saw another 35 crashes, which is why it joins Van Brunt and Hardesty as two of the study’s primary target zones.

Consultants brought on for the safety study, which is supported by $36,000 in funds from MARC and $10,000 from KCMO, guided the steering committee through the process of establishing goals for the study during the July 12 meeting.

Consultant Shashi Gannavaram praised the steering committee for their engagement and focus during the lengthy session.

“This is a great group. These are the kinds of discussions you want going on in a project. The interaction, the energy; you come up with a better product at the end of the whole thing,” said Gannavaram. “They want it to become more pedestrian-friendly, that is the most important goal. This is a pedestrian study, so that’s what they’re focused on. They want to bring back the street to the neighborhood level, and move it away from being this highway barrier.”

Some of the traffic-calming methods discussed for Independence Avenue included the potential construction of curb extensions at high-traffic intersections, the installation of pedestrian-access medians, an increased focus on streetscaping, the realignment of the streets and the construction of better sidewalks.

“It’s going to be a combination of all those elements along the corridor,” said Angela Eley, a long term planner with the City of Kansas City. “My big takeaway was that we really need to think about the pedestrian environment along the corridor.”

Gannavaram acknowledged that with pedestrian solutions, something will have to give when it comes to the driving experience along Independence Avenue.

“There are fixes that can be done,” said Gannavaram. “How much are we willing to sacrifice in the car so that pedestrian (experiences) can be better?”

Bobbi Baker-Hughes of the Independence Avenue Community Improvement District and Northeast Kansas City Chamber of Commerce called the steering committee meeting “interactive and engaging,” adding that one issue along the Avenue is that the wide lanes can lead drivers to push the speed limit.

“There are some lanes on the east end of the Avenue that are 16-feet wide,” said Baker-Hughes. “That causes it to feel like a race track, but the reality is that there’s parking; it’s just not defined parking.”

A relatively easy fix to that issue, Baker-Hughes said, would be to paint the parking spots. That would define the parking spaces more clearly and create the appearance of narrower lanes along the Avenue – without having to do any construction.

“That’s a short-term win, where you can change the illusion of the street while continuing to work towards a long-term strategy,” Baker-Hughes said.

Long-term, Baker-Hughes was intrigued by the idea of creating curb extensions at some Independence Avenue intersections.

“Some of the other things that were discussed were bump-outs at some of the cross streets – elongating the curb where Independence Avenue and the side street meet, so that you really have to slow down when you make the turn,” she said.

Moving forward, study leaders are planning to place pop-up booths at Independence Plaza Park and along the Avenue on Saturday, August 26, when the Local Initiatives Support Coalition (LISC) is hosting an unveiling event for the utility box wraps that will be installed along Independence Avenue. The pop-up booths are expected to include handouts of the conceptual plans for the corridor, as well as data about the area that’s been presented to steering committee members, including crash data information and traffic data.